The View from Above: Seeing Life from a Cosmic Perspective

The ancient Greek philosophers knew that the Earth was a globe or sphere, and many hundreds of years before we could actually look back and see the Earth from above, beautiful engravings from the Renaissance illustrated our living blue planet, with continents and oceans, floating through space. 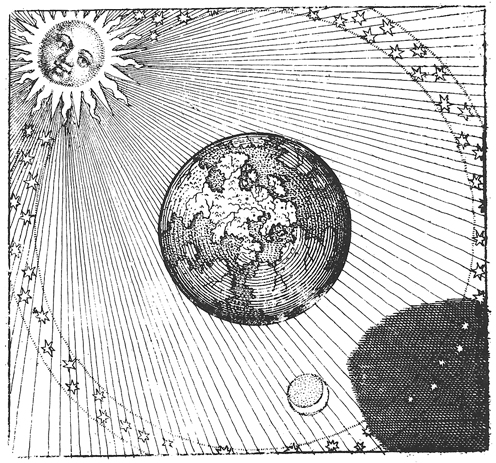 The Earth and its shadow floating in space. Engraving from Michael Maier’s Atalanta Fugiens (1618).

Seeking to live in harmony with nature and cosmic reason, during Hellenistic times the Stoic philosophers practiced a spiritual exercise, called “the View from Above,” in which they imagined themselves high up in space, looking down on the Earth below. In the words of Marcus Aurelius,

Watch and see the courses of the stars as if you were running alongside them, and continually dwell in your mind upon the changes of the elements into one another … When you are reasoning about mankind, look upon earthly things below as if from some vantage point above them.

In the words of philosopher Pierre Hadot, the goal of this exercise was “to relocate human existence within the infinity of time and space, and the perspective of the great laws of nature” and to see “the mutual implication in each thing in everything else.” In this way, viewing things from a cosmic perspective, the philosopher would see the world as it really is; and seeing life in a cosmic context, he would not be psychologically troubled by the small disturbances that cause such a large amount of suffering for much of humanity.

Philosophy in antiquity was an exercise practiced at each instant. It invites us to concentrate on each instant of life, to become aware of the infinite value of each present moment, once we have replaced it within the perspective of the cosmos. The exercise of wisdom entails a cosmic dimension. Whereas the average person has lost touch with the world, and does not see the world qua world, but rather treats the world as a means of satisfying his desires, the sage never ceases to have the whole constantly present to mind. He thinks and acts within a cosmic perspective. He has the feeling of a whole which goes beyond the limits of his individuality.

While this kind of sublime experience was available to only a tiny number of people in the ancient world, thanks to the images of the space program now readily available on the Internet, the transformative experience of seeing the Earth from space is now available to a large percentage of humanity. Recently, for example, a short, stunning documentary about the transformative effect of seeing the Earth from space, Overview, was created especially for distribution on the Internet by a group of young filmmakers, the Planetary Collective.

OVERVIEW from Planetary Collective on Vimeo.

As I argue in chapter 12 of my book Restoring the Soul of the World, when we humans were finally able to look back and see the the fragile beauty of our home planet from space, it represented a crucial turning point, both symbolically and historically. After those stunning images, no one could be gaze upon the world any longer as disembodied, Cartesian spectator when thinking about the Earth or our place in nature. When we experience the deeply moving beauty of the Earth seen from space, and intuitively realize that all life is bound together, facing a common fate, we automatically sense ourselves as participants in life’s tapestry, not as disembodied spectators.

In the words of Stewart Brand, “Those riveting Earth photos changed everything. For the first time humanity saw itself from outside. . . . Suddenly humans had a planet to tend for.”