What is a Cosmopolis?

Life must proceed on the conviction that “I am not born for a single cranny; this whole universe is my homeland.” — Seneca

The Greek philosophers had spoken of the cosmopolis, the “world-city” in which all individuals are related to one another, regardless of country, race, or religion. But with the coming of the Hellenistic age, the idea of global civilization became a tangible reality, and the ancient city of Alexandria its most significant expression — a meeting point between East and West, philosophies and religions, and disparate cultures. Once again, we find ourselves in a global civilization. But what makes for a genuine world community, and how is the ancient idea relevant for our own times?

The Greek word Logos refers to the intelligence of nature, and, in its ultimate sense, the rational order of the cosmic pattern. For the Presocratics, and most Greek philosophers, anything in nature that possesses order is informed by logos (intelligence) and psyche (life or soul). Plato, for example, had described the cosmos as “A single Living Creature that contains all living creatures within it,” and in the Greek tradition, the intelligence that is present in us, in our souls and intellects, was seen as part of the same Logos that underlies the cosmic pattern.

Cosmopolis: Self, Cosmos, and Society

For the Stoic philosophers, cosmology and ethics are tightly interwoven. To become complete human beings, we must “follow nature”; and for humans, this means cultivating the rational spark within, which binds us with the deepest heart of the cosmic pattern, and with other human beings.

At the deepest level, cosmopolis or “world community” means the community of the cosmos or the entire universe.

Because of the spark of cosmic reason that exists within us, all persons are united in a universal brotherhood of humanity — men, women, and the people of every race. In contemporary language, we are citizens of the planet — the biosphere — and the entire cosmos. With the advent of the idea of the cosmopolis, human beings were no longer defined as belonging to a particular tribe, but to the whole of humanity. In the words of the ancient writer Seneca, “Life must proceed on the conviction that ‘I am not born for a single cranny; this whole universe is my homeland.’”

In the cosmopolis, there is a moral community of rational beings, which implies a collaboration with others and society. For the Stoics, our inner nature demands that we fulfill our potential and become vitally involved in the world community of which we are a part. Individual fulfillment, fulfillment of the human race, and fulfillment of the entire cosmic process are all intertwined. 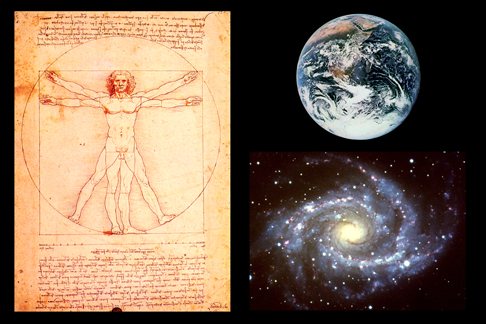 For the Stoics, human community is more than just a human invention. It is rooted in the deep order, harmony, and relatedness of the cosmic pattern. In this way, Stoic thought anticipates modern ecological thought and thought about the biosphere, which is itself rooted in the initial conditions of the universe.

For example, in writing about the cosmopolis and the intelligence in nature that unites all things, Marcus Aurelius, in the following passage, is describing what we might today call “ecological relatedness”:

All things are interwoven with one another; a sacred bond unites them; there is scarcely one thing that is isolated from one another. Everything is coordinated, everything works together in giving form to the one universe.

Marcus Aurelius maintained that “the chief good of a rational man is fellowship with his neighbors.” Moreover, we are not just “parts” of the whole but actually the “limbs” of the universe. If we think of ourselves as just parts, he explains, we act only out of “bare duty,” and not out of “love from the heart of mankind.”

The Greek idea of Logos pointed toward a kind of mystical rationality that is rooted in a felt sense of the beauty and transcendent order of the cosmos.

Is Our Global Civilization a Cosmopolis?

Only now do we once again live in a world that approximates the global civilization of the Hellenistic world and the “global village” of ancient Alexandria, where the entire world was on tap. Each day, in our own time, the world becomes smaller and smaller, due to nearly instantaneous travel (airlines), instantaneous communication (the World Wide Web), and a globalized, interconnected world economy.

But is a globally interconnected world actually a cosmopolis?

Consciously living in a cosmopolis — as opposed to just existing in one — requires a qualitative state of awareness.

So what, then, is required? What would it take to live in a cosmopolis again?

What is Required to Live in a Cosmopolis?

In studying the ancient idea of the cosmopolis, three key ideas emerge:

For example, we can clearly see these three foundational ideas reflected in the quotations from Marcus Aurelius reproduced above.

A Sense of the Transcendent Order

In a cosmopolis, there is a living sense of our bond with the great transcendent order of which we are a part.

The most fundamental fact of our existence is that we are all part of a greater life, a cosmic life — but that vision has largely become eclipsed by life in the technopolis, our technological civilization.

From Pythagoras, through Plato, through the Stoics, through Plotinus, and through many of the greatest contemporary scientists of the Western tradition, we discover lines of thought all based on the fundamental realization that we belong to, and emerged from, a vast, luminous, transcendental order — an ordered cosmos radiant with wholeness, relatedness, and beauty.

This vision, and the related idea of living nature, is essential for a true ecology to emerge – as opposed to a mechanistic ecology based on “resource management.”

A sense of the transcendent order is the meeting point where real philosophy and real science intersect meaningfully. It allows us to remember the truth of our human nature — that our human life is intertwined and bonded with the life of the entire biosphere. With a felt sense of the transcendent, we realize we are embodiments of nature’s cosmic intelligence — and living embodiments of a vast cosmic process.

The Sense of the Transcendent as a Solution to Religious Fundamentalism

When a felt sense of the transcendent is present, we experience nature in a spiritual sense, and we can intuitively sense and appreciate the radiant truth and beauty at the core of all the world’s religions, without necessarily being held hostage to their outer forms, or allowing the outer forms to turn into imprisoning systems of idolatry.

Because of this, the felt experience of the transcendent is a solution to religious fundamentalism, which is usually rooted in a kind of tribal insularity, accompanied by psychological “splitting” and a division from the whole.

Real fundamentalists are usually in an adversarial relationship with everything except their own narrow worldview. But when you experience a deep connection with the whole of reality, it becomes very difficult to maintain that isolation and insularity.

A Sense of the Transcendent and Global Community

When a sense of the transcendent is present in a global setting, we recognize our kinship with all humanity and with all truth, not just with limited systems that demand exclusivity.

In this way, a sense of the transcendent forms the basis for a real global community or cosmopolis — not just a “world civilization” based on intercultural mingling, economic globalization, or the spread of the World Wide Web to every corner of the planet.

Finally, the idea of a transcendental order is not just a mystical feeling or perception, but a fundamental assumption of science.

While the sense of a transcendent order may be spiritual and aesthetic, the idea of a transcendent order is primarily scientific. It is encapsulated in the cosmological principle, which is the fundamental assumption of modern physics. According to the cosmological principle, wherever you go in the universe, the same laws apply everywhere – so the universe looks pretty much the same, everywhere.

Without the cosmological principle, physics simply would not work, and the most important scientific discoveries of the last hundred years — like the discovery of the expansion of the universe — could never have been made.

The Cosmopolis Project: Six Values for Cultivating Life in a Global Community

Based on the ancient idea of the cosmopolis, the Cosmopolis Project seeks to enhance contemporary life by investigating and encouraging the development of six core values that can help transform our current “global civilization” into a genuine world community, that is culturally satisfying, spiritually fulfilling, and ecologically sustainable. The project seeks to explore and encourage the following six values . . .

Three “values of place” that locate us in a cosmopolis: 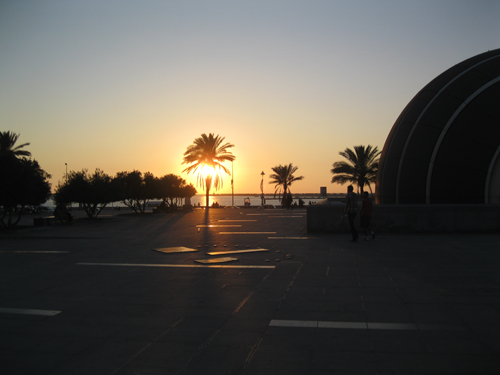 Sunset outside the Bibliotheca Alexandrina — the new Library of Alexandria — where the Cosmopolis Project was officially launched in June 2012.

This article is an excerpt from a keynote address by David Fideler entitled “Alexandria, the Cosmopolis: Global Community, Then and Now,” given at a conference on Ancient Alexandria: Greco-Egyptian Birthplace of the Western Mind, held June 9–14, 2012, at the Bibliotheca Alexandrina, Alexandria, Egypt, where the Cosmopolis Project was first launched. Copyright © 2013 by David Fideler. All rights reserved. No part of this article may be duplicated or republished in any form without the permission of the author.